The Pheasant Coucal is a large, long-tailed, pheasant-like cuckoo that occurs in northern and eastern Australia, as well as southern New Guinea and Timor-Leste. Unlike most species of cuckoos, the Pheasant Coucal builds its own nest, a shallow platform of sticks and grass, into which it lays between two and five white eggs. The young coucals are fed by both sexes, but the male parent does most of the feeding, providing the nestlings with small vertebrates, such as frogs, grasshoppers and other insects.

A large ‘pheasant-like’, ground-dwelling cuckoo, the Pheasant Coucal has a long tail and short rounded wings. In its breeding plumage, it has a black head, neck and underbody with the upperparts and wings reddish-brown with black and cream barring, and the black tail is barred orange. Out of breeding, the head and back return to a reddish-chestnut colour and the underparts are cinnamon brown, with all streaked boldly white. The eye is red. Sexes are similar in plumage, but females are larger than males. Young birds look like paler, non-breeding adults with orange spots on the head, neck and upper body. When disturbed, coucals run rather than fly, or fly clumsily, plunging into cover. Unlike most other cuckoos, the Pheasant Coucal is not a nest parasite. 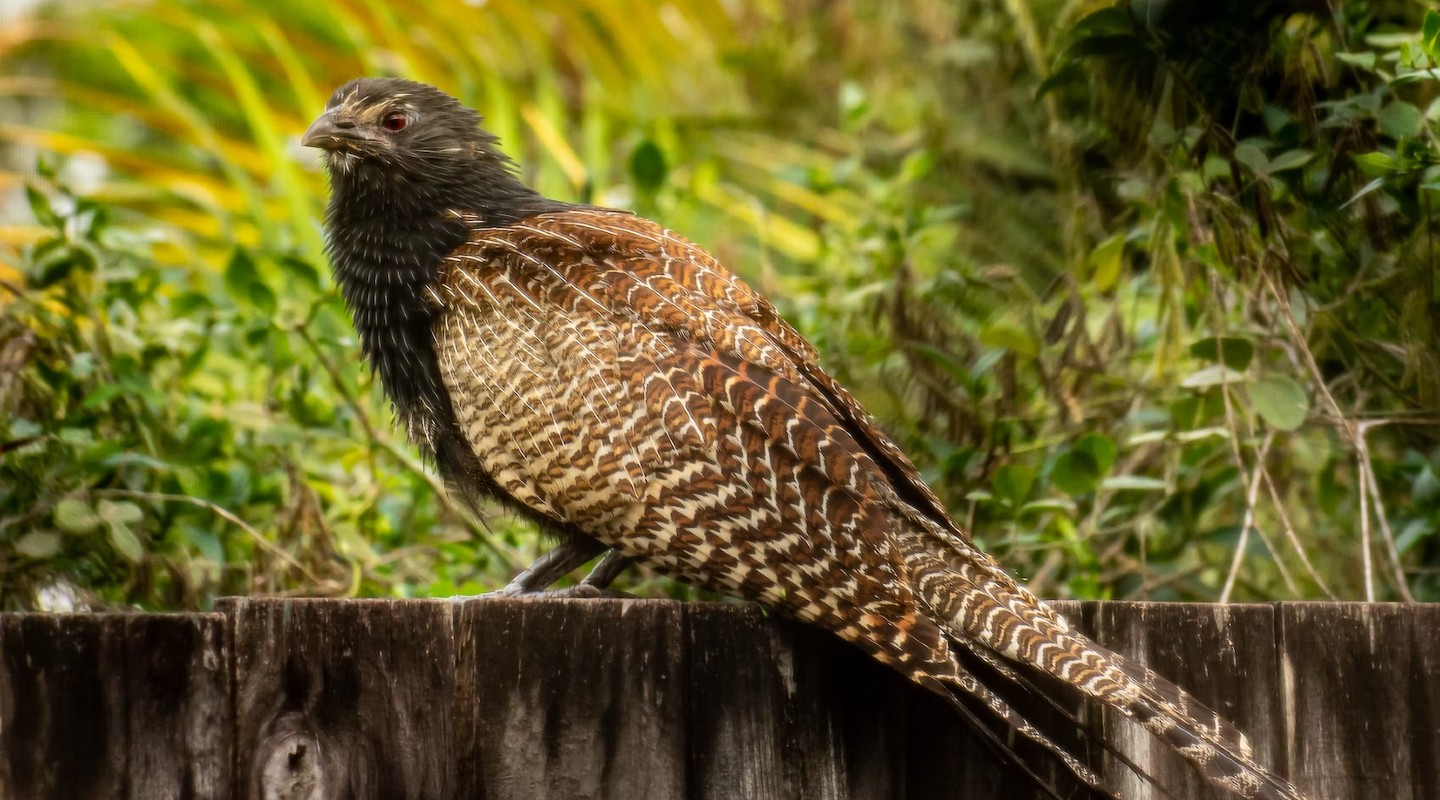 The Pheasant Coucal is found in northern and eastern Australia, as well as New Guinea and East Timor. It is found from the Pilbara, Western Australia, to south-eastern New South Wales. In New South Wales it is mainly found east of the Great Dividing Range from the Queensland border to the southern Hunter region, with some around Sydney and further south to Illawarra.

The Pheasant Coucal prefers dense understorey vegetation, particularly grasses, rushes, bracken and sedges, in open forests and woodlands, and around wetlands. Often found in sugar cane plantations near wetlands, on farmlands with thick grasses and weed-infested thickets, such as Lantana. Often seen in parks, gardens and along roads or railway lines.

The Pheasant Coucal is the only Australian cuckoo to build its own nest. It also lives and nests on the ground, unlike other cuckoos.

The Pheasant Coucal feeds on the ground on large insects, frogs, lizards, eggs, young of birds, and sometimes small mammals.

Pheasant Coucals form lasting pairs and, unlike other Australian cuckoos, build their own nests and raise their young themselves. The nest is usually hidden in thick grass or sugar cane or in weedy thickets and is a platform of sticks, grass or rushes, lined with leaves and grasses. The male usually incubates the eggs and feeds the young, with the female helping with feeding. More than one clutch can be laid in one season.