The Spangled Drongo is noisy and conspicuous, usually active, and frequently aggressive to other species. They have glossy black plumage, with iridescent blue-green spots (spangles), a long forked tail and blood red eyes.

Sexes are similar, but the female is slightly smaller. Occasional white spotting can be seen on the upper wings of both sexes. Young birds are more sooty black without the spangles and the eye is brown.

A variety of sounds, including some distinctive metallic notes like a stretched wire being plucked, and occasional mimicry of other bird species. Bird call recorded by: Fred Van Gessel 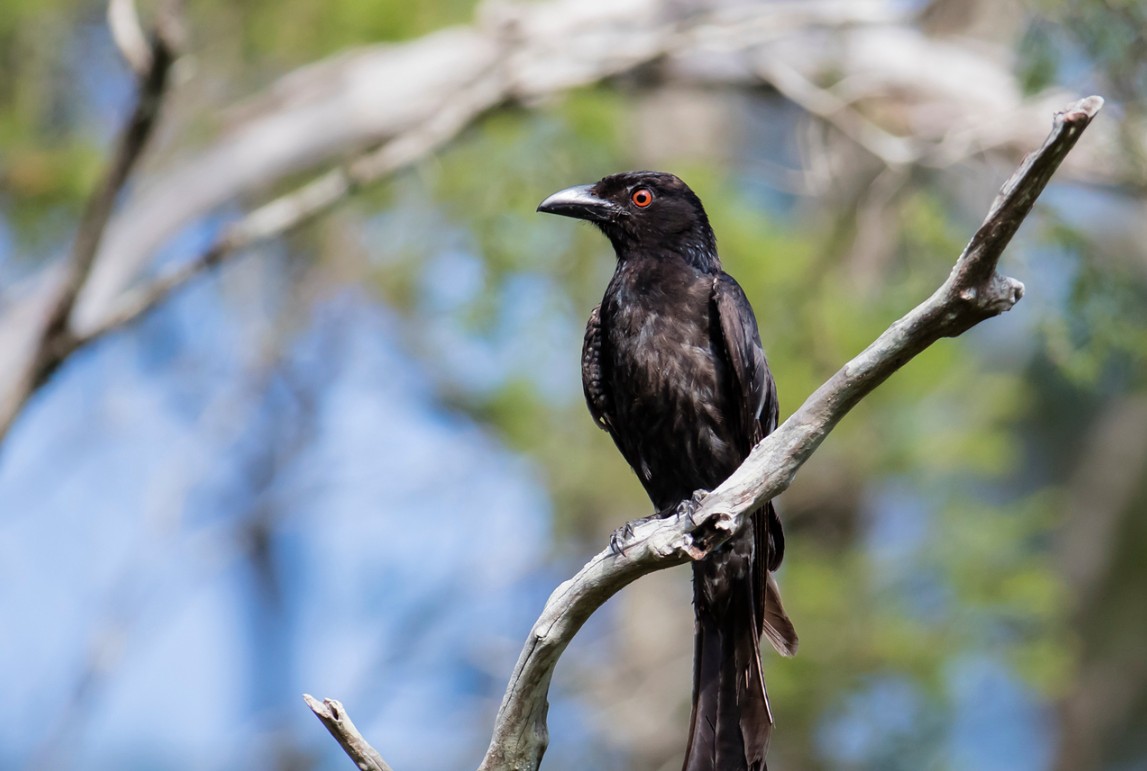 Spangled Drongos are found throughout northern and eastern Australia. Also found in New Guinea and eastern Indonesia. Closely related species occur through south-east Asia to India, China, and the Philippines and on some south-west Pacific islands.

Spangled Drongos prefer wet forests, but can also be found in other woodlands, mangroves and parks. They tend to avoid more dense forest types and rainforest interiors. Birds are more common in the north.

During the breeding season, Spangled Drongoes can be aggressive when away from the nest, and often chase other birds, especially cuckoo-shrikes, to steal food from them. Any potential threat that approaches is readily attacked, and they often mob owls and other birds of prey, sometimes striking them. Drongoes are also often unafraid of people. They can make a variety of sounds, including some distinctive metallic notes like a stretched wire being plucked, and occasional mimicry of other bird species and are often seen either singly or in pairs.

The Spangled Drongo is usually seen perched on an open branch or telegraph wire, where it awaits a passing insect. Once seen, its prey is pursued in an acrobatic display, and is caught in the drongo’s slightly hooked bill. The Spangled Drongo then returns to its perch to eat its victim. The prey is guided into the bill with the assistance of sensitive, long, wire-like bristles bordering the bill (rictal bristles). Insects are also taken from foliage and from under bark; fruit and nectar also form part of its diet.

Spangled Drongos normally have only one clutch per season. Both adults participate in building the nest, which is a simple, shallow cup of twigs, vine tendrils and grasses, held together with spider web, and has been likened to a cradle or a hammock. It is placed in a horizontal fork of tree, normally toward outer edges and up to 10 m – 20 m above the ground. Both sexes incubate the eggs and care for the young. Spangled Drongos actively defend the nest against intruders.