The Yellow Wattlebird occurs only in Tasmania and is Australia’s largest honeyeater. It is active, noisy and conspicuous, especially when it congregates into flocks, some of which may comprise dozens of birds. The call of this species is a discordant mixture of gargling and coughing noises, audible over long distances. Pairs may call in duets. When calling, the wattlebird throws its head back so far that the feathers of its crown may touch those of its back, and then it is suddenly jerked forward, releasing the call.

Loud, harsh and raucous: ‘kuk’ or ‘kukuk’. Calls are ‘spat’ out, with the bird jerking its head back then forward strongly. Bird call recorded by: Nick Talbot

The Yellow Wattlebird is Australia’s largest honeyeater. It is a slim bird with a long tail, a short strong bill and distinctive yellow-orange wattles on the sides of the head. These wattles become larger and brighter during the breeding season. Adults are dark brown above, with a pale face, strongly streaked brown and white head, and white below with heavy dark streaks on the breast and sides. The belly has a prominent yellow patch. Females (40 cm) are noticeably smaller than males (46 cm). Young birds have a much paler head, smaller wattles and a browner underbody. This species is only found in Tasmania and is also known as the Tasmanian Wattlebird. 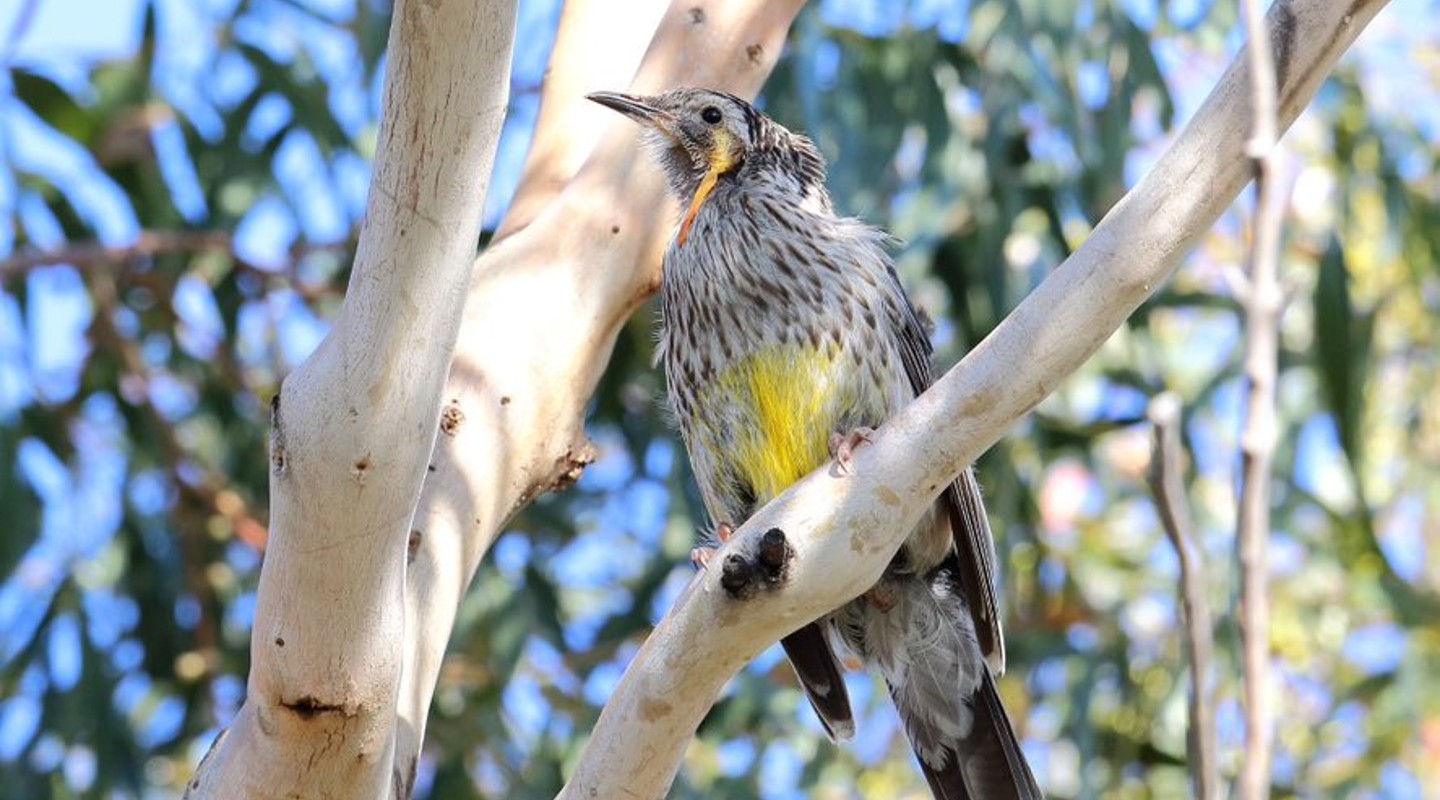 The Yellow Wattlebird is endemic to Tasmania. It is widespread in the eastern and central areas but is rarely found in the west or south-west. It is also widespread on King Island and is found on Three Hummock and Hunter Islands.

The Yellow Wattlebird is found in a variety of habitats from sea level to the subalpine zone (up to 1350 m altitude). It is found in dry and wet forests, woodlands, alpine forests and coastal heaths. It is common in urban parks and gardens, as well as open spaces such as reserves, cemeteries and golf courses.

Nomadic outside of the breeding season, with autumn-winter flocks moving to lower areas. Often visit urban gardens during autumn and winter, and may move in response to the flowering pattern of preferred food trees.

The Yellow Wattlebird feeds mainly on the nectar of eucalypts and banksias. It will also eat fruit and insects. It forages at all levels of the canopy, from the top of trees to near ground level. Will visit gardens and orchards to feed on introduced fruits and flowers, mainly eating overripe or fallen fruits. It sometimes feeds in small flocks and may feed with Little Wattlebirds and other honeyeaters attracted to common food sources such as manna (sweet secretions) from the Cider Gum, Eucalyptus gunnii.

The Yellow Wattlebird nests in breeding pairs that aggressively defend their breeding territories against other birds. The female alone constructs the open, bowl-shaped nest of thin twigs, bark and grass, lining it will bark, roots, grass and mammal fur or wool. The nest is placed about 3-20 m above the ground, often in an exposed tree fork, usually in eucalypts. Both sexes incubate the eggs and feed the young, continuing to feed fledglings for a few weeks. In coastal areas, two broods may be raised in one season, while in central areas usually one brood is raised.