Of the dozen species of cuckoos that occur in Australia, the Channel-billed Cuckoo is the largest. Like many cuckoos, it lays its eggs in the nest of another bird and being a large cuckoo, it must lay its eggs in the nest of another large bird. The species usually chosen as foster parents are Pied Currawongs, Australian Magpies, crows and ravens, although occasionally eggs are laid in the mud nests of White-winged Choughs or Magpie-larks, and very occasionally in the nests of birds of prey.

Apart from the Channel-billed Cuckoo’s large size, its massive pale, down-curved bill, grey plumage (darker on the back and wings), and long barred tail make it difficult to confuse it with any other bird. In flight, the long tail and long wings give the bird a crucifix-shaped (cross-shaped) silhouette. Young Channel-billed Cuckoos have more mottled buff, brown and grey plumage.

Although they are not nocturnal birds in the strict sense, Channel-billed Cuckoos are notorious for calling all night long during the breeding season.

The call of the Channel-billed Cuckoo, a loud ‘kawk’ followed by a more rapid, and weaker ‘awk-awk-awk…’, is as distinctive as the bird’s appearance. The call may be given when perched but is most often given in flight. Bird call recorded by: Fred Van Gessel 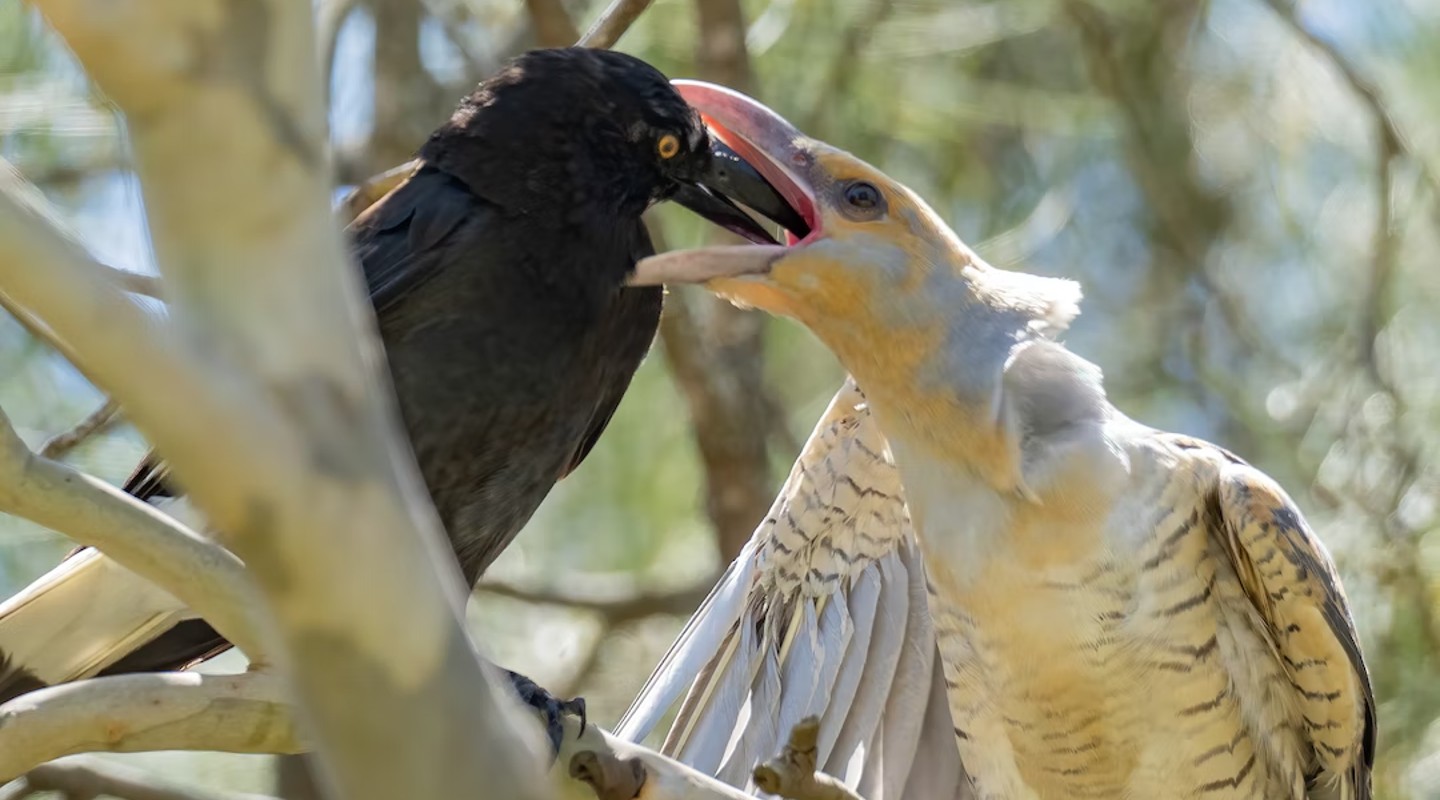 The Channel-billed Cuckoo migrates to northern and eastern Australia from New Guinea and Indonesia. This occurs between August and October each year. The birds leave Australia in February or March.

The Channel-billed Cuckoo is found in tall open forests, usually where host species occur. Can be found in urban parklands.

Often inhabites urban parklands, and heard by its distinctive call. It is often seen in trees eating figs and fruits.

The favoured foods of the Channel-billed Cuckoo are native figs and native fruits, though some seeds, insects and even baby birds are also taken. The birds take figs from the tree with their massive bills.

The Channel-billed Cuckoo lays its eggs in the nests of the Australian Magpie, Gymnorhina tibicen, the Pied Currawong, Strepera graculina and members of the crow family (Corvidae). Unlike many other cuckoos, the young birds do not evict the host’s young or eggs from the nest, but simply grow faster and demand all the food, thus starving the others. Often the adult female will damage the existing eggs in the nest when she lays her own and she may even lay more than one egg in a single nest. Breeding season is from August to October.