The Pied Butcherbird, widespread throughout large parts of mainland Australia, is the familiar species of butcherbird to most people. One of the species’ readily recognised aspects is its beautiful, haunting, flute-like song which may be given throughout the day and sometimes well into moonlit nights. Once heard, the song is difficult to forget, and it has been described as ‘one of the finest in the world’. Added to this, Pied Butcherbirds also often include mimicry of a wide range of species in their repertoire.

The Pied Butcherbird is a medium-sized black and white bird. It has a full black hood, dark brown eye and long, hooked, grey and black bill. It has a broad white collar that goes all around its neck and a black bib (throat area). The rest of the underparts are white and the legs are black. The upper parts are mostly black, with large patches of white on the wings and rump. In flight, the white corners of the otherwise black tail are easily seen. Both sexes have identical plumage, but the male is slightly larger than the female. Young Pied Butcherbirds are generally duller than the adults are. The areas of black are replaced with brown and the white areas are washed with buff. The birds also have an ill-defined bib, which becomes more distinct with age.

The Pied Butcherbird’s voice is a beautiful, melodious fluting, sometimes given in turn by several individuals. Bird call recorded by: Fred Van Gessel 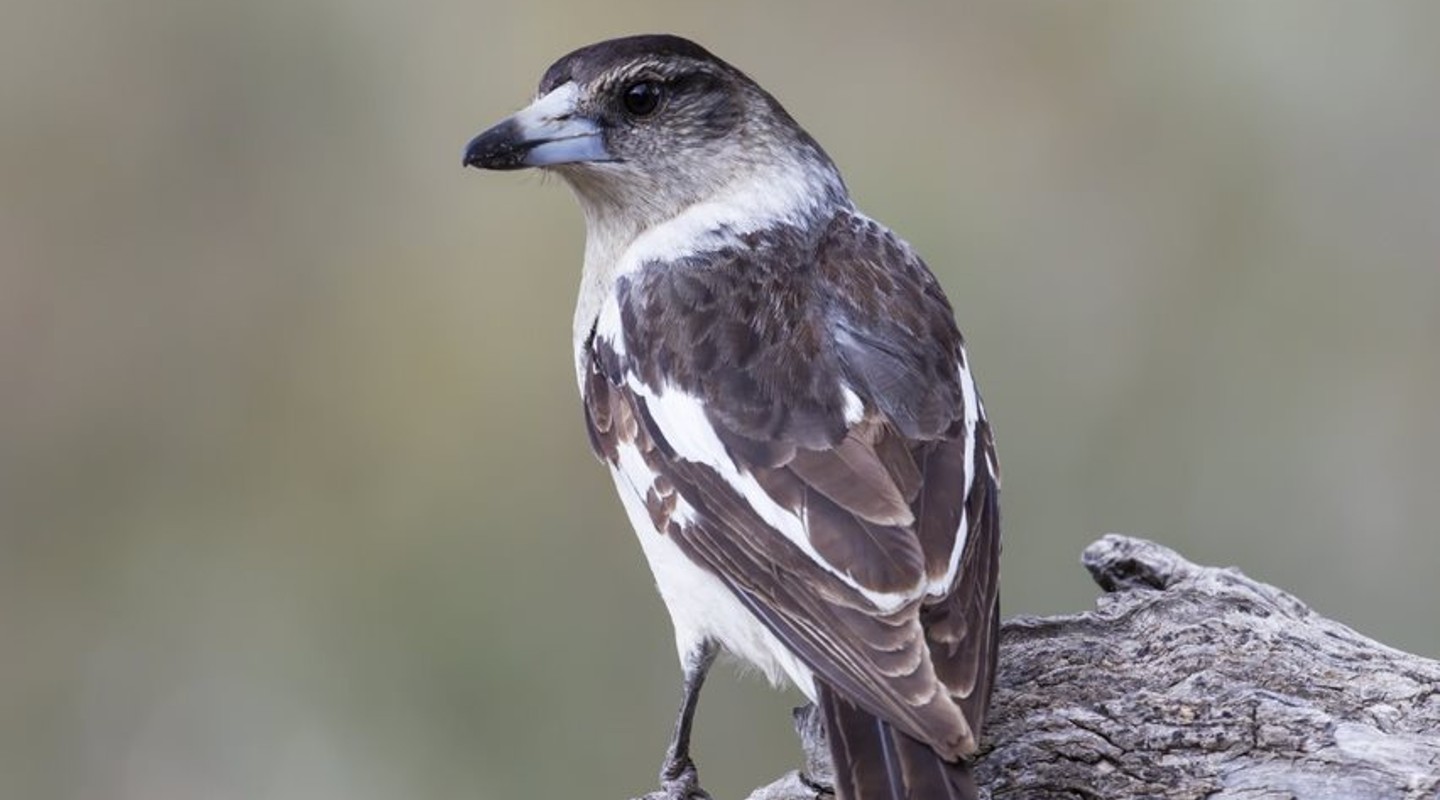 The Pied Butcherbird is found throughout the Australian mainland, with the exception of most of the southern and south-eastern coastline, and the more arid areas of the inland. It is absent from Tasmania.

The Pied Butcherbird often approaches houses and parks and is more often seen than heard, as it sings from  a prominent perch

All butcherbirds are aggressive feeders. Pied Butcherbirds prey on small reptiles, mammals, frogs and birds, as well as large insects. Most food is caught on the ground. The birds sit on an exposed perch and swoop down on their prey. Hunting groups may consist of several birds from a large group, which may comprise three or four adults and several young birds, but birds may also hunt alone or in pairs.

The breeding season of the Pied Butcherbird varies throughout its large range. The female constructs the nest and incubates the eggs alone, and is fed by the male and other members of the group. The nest is a bowl of sticks and twigs, lined with grasses and other finer material. It is usually built in an upright tree fork up to 5 m above the ground. More than one female may lay eggs in the same nest.