Australia's migratory shorebirds are incredible, many flying to and from the Northern Hemisphere every year. But sadly, because of the destruction of their habitats, hunting, and disturbance, their numbers have declined greatly.

The Bar-tailed Godwit holds the record for the longest non-stop flight of any bird, with a 13,560km continuous flight from Alaska to Australia.

Many species of migratory shorebirds are in rapid decline, both in Australia and along the Flyway. They need to forage at terrestrial and coastal wetlands to replenish their energy so they can migrate and breed successfully, but they’re threatened by the destruction of these habitats, especially in Asia. Disturbance is also a significant problem while they’re in Australia.

Working together to save migratory shorebirds

BirdLife Australia leads the National Migratory Shorebird Conservation Action Plan (MS CAP). This plan has been developed by a broad range of stakeholders, all working together for shorebird conservation and management across Australia and elsewhere in the East Asian–Australasian Flyway (EAAF).

The MS CAP works toward improving coordination and collaboration to save the 37 species of migratory shorebirds which regularly visit Australia, focusing on conservation, management, and research.

BirdLife Australia’s special interest group, the Australasian Wader Studies Group (AWSG), studies shorebirds in Australia and along their migration routes in the Asia–Pacific. They conduct extensive research banding and tracking to unravel the mysteries of these fascinating birds.

Migratory shorebirds undertake among the longest migrations of any species, often covering many thousands of kilometres, through many different countries.

For example, in the Yellow Sea — a bottleneck for migratory shorebirds on northward and southward migration — over 65% of intertidal habitat has been lost over the past 50 years.

Coastal development on staging and non-breeding grounds throughout Asia and Australia poses the most significant threat to most of the migratory shorebirds that regularly visit Australia. BirdLife Australia undertakes many research and conservation programs across the country to make a difference.

How BirdLife Australia is making an impact to save migratory shorebirds

At BirdLife Australia, we are doing everything we can to save migratory shorebirds. We’re implementing plans to monitor shorebirds and their habitats, working with local communities, land managers, and decision makers to change the way we manage habitats to reduce threats to the shorebirds.

In Australia, shorebird counts have been undertaken by dedicated volunteers since the 1980s. In 2007, this was reinvigorated by BirdLife Australia with the creation of the Australian Shorebird Monitoring Program, with the AWSG continuing to make a crucial contribution to the monitoring of shorebirds.

This national, citizen science effort to count shorebirds across 520 Shorebird Areas contributes to our vast, long-term database. This allows us to undertake rigorous scientific research to aid shorebird conservation and management, and track long- and short-term population trends. To join us for our biannual shorebird counts, click here.

Based on thousands of field surveys and millions of shorebird sightings, the Directory used rigorous methodology to identify key sites and provide useful and objective guidance towards the protection of shorebirds and their habitats.

Since 2019, BirdLife Australia has developed the approach of the Migratory Shorebird Site Action Plan (SAP), which is a specially tailored plan for selected Shorebird Sites. Our intention is to empower local communities around Australia to take action and save specific Shorebird Sites identified in the National Directory as key sites that are significant for shorebirds.

Plans are developed and owned locally, funded by external partners with expert guidance from BirdLife Australia to showcase how community actions for migratory shorebirds can be stimulated at important sites around the country. Our role has been to facilitate the development of SAPs by local communities, and to then advise on their implementation. The Geum Estuary Project is a collaboration led by BirdLife International and BirdLife Australia. This project aspires to demonstrate alternative and sustainable paths for developing coastal wetlands in the Republic of Korea. 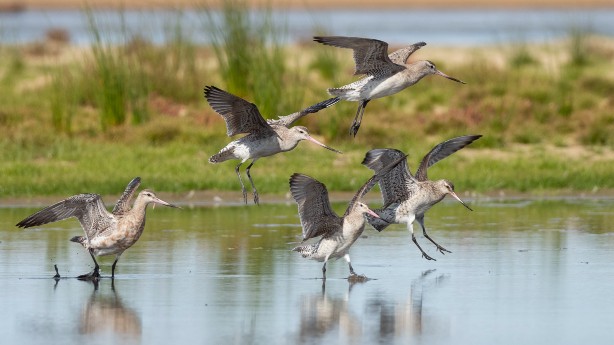 The Australian Shorebird Monitoring Project provides vital information on shorebird declines in Australia and the factors that may cause them. The database comprises the most complete shorebird count data available in Australia and helps to uncover significant population changes over the long term.

Toondah Harbour: a safe home for shorebirds - not a billion dollar development!

The Geum Estuary Project is a collaboration led by BirdLife International and BirdLife Australia. This project aspires to demonstrate alternative and sustainable paths for developing coastal wetlands in the Republic of Korea.