The Australasian Bittern lives in freshwater wetlands in dense beds of reeds and rushes, where their secretive nature makes them difficult to see. When disturbed, Australasian Bitterns disappear slowly into cover or blend into the surrounding reeds by keeping perfectly still with their neck and bill pointing skywards. Drainage of swamps removes the habitat of Australasian Bitterns, but ricefields are also used by the species as habitat.

The Australasian Bittern is a heavy-set, partially nocturnal heron with upper parts that are patterned dark brown, buff and black, and underparts that are streaked brown and buff. The eyebrow and throat are pale, and the side of the neck is dark brown. The bill is brown and the legs are greenish, and the average size is 71 cm. It resembles an owl in flight, with broad wings that beat slow, steady, and shallow with dangling legs on take-off. 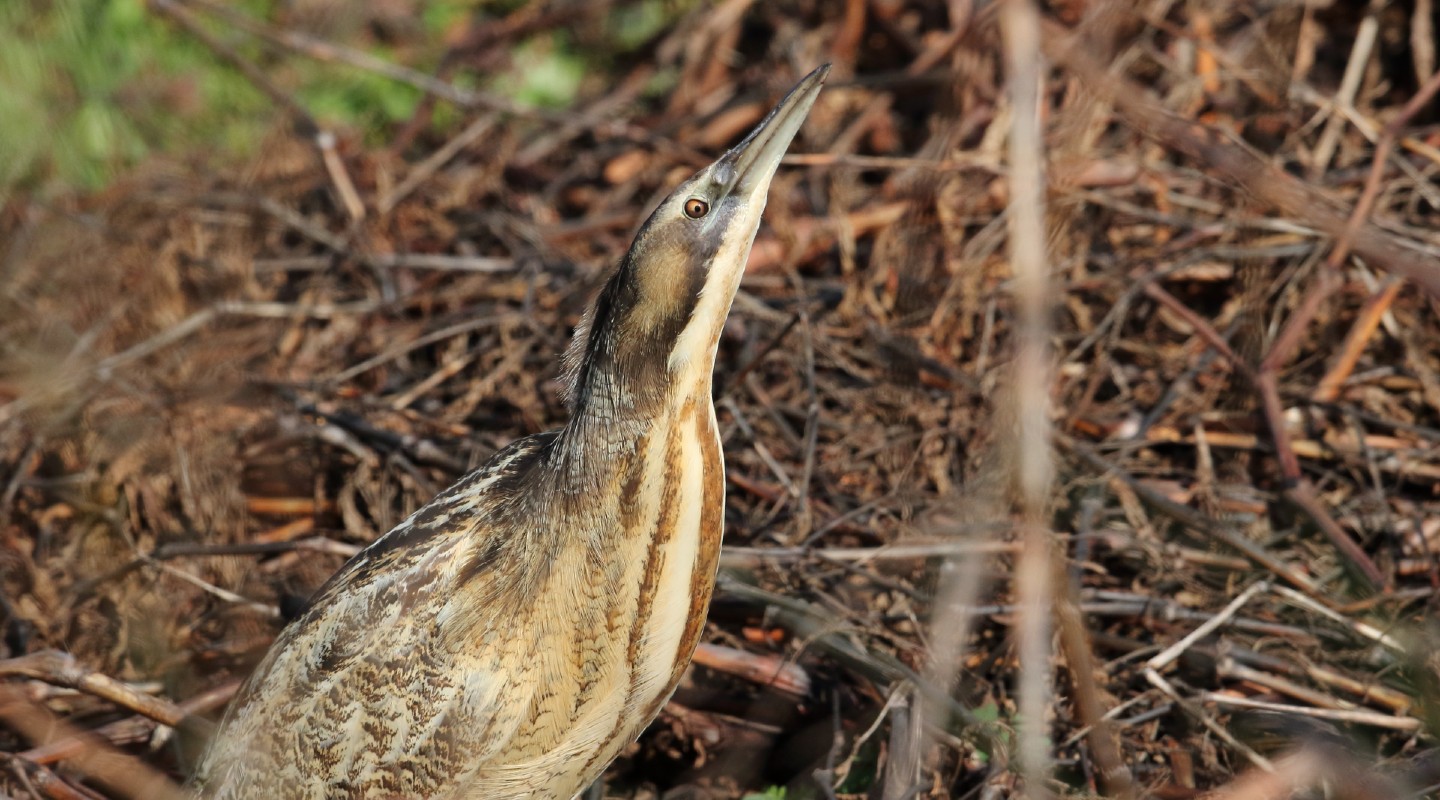 The Australasian Bittern is found in coastal and sub-coastal areas of south-eastern and south-western mainland Australia, and the eastern marshes of Tasmania. They are also found throughout the Murray-Darling Basin and in swamps in south-eastern South Australia. Also found in New Zealand.

The Australasian Bittern frequents reedbeds and other areas, particularly those dominated by sedges, rushes, reeds or cutting grass. They are mainly found in freshwater environments but can also tolerate brackish estuaries (a combination of saltwater and freshwater), with lots of reeds and rushes. Australian ricefields provide an extensive area of habitat that is suitable for bitterns to live in, and as it is kept watered by irrigation, the conditions in ricefields are often more reliable than in natural wetlands.

The Australasian Bittern is a solitary bird that is seldom seen as it is highly camouflaged. When alarmed, they freeze, with their neck stretched up and the bill pointing skywards. Sometimes they even appear to sway in the breeze, in time with the surrounding reeds. This combination makes them blend in well with the surrounding vegetation. They are usually heard, rather than seen, with an eerie call or ‘boom’ that is said to resemble a ‘Bunyip’ (a mythical creature said to live in swamps and waterholes).

Australasian Bitterns forage mainly at night on a wide range of small animals, including birds, mammals, fish, frogs, yabbies, snails, insects and spiders. Like other herons, these birds use several techniques to capture prey, including standing and waiting, slow stalking, and active pursuit. Wing and leg movements are used to confuse or attract prey items.

The Australasian Bittern has a regular breeding season (October to February) but will also breed during inland flooding. The nest is a shallow structure of dry or green reeds, within a clump of reeds in water or a swamp and is built on a platform of bent-over reeds. They lay 4 to 6 eggs.