Carnaby’s Black-Cockatoo is endemic in the south-west of Western Australia. It is a large, dull black cockatoo and one of Australia’s five black cockatoo species. The population of this cockatoo has declined because of habitat degradation. Trees with suitable breeding hollows are rapidly being cleared and are in short supply. Research has shown that they need remnants of native vegetation within 12 kilometres of their nesting sites to raise healthy young.

The Carnaby’s Black-Cockatoo is a large, dull-black cockatoo with a short erectile crest and a large bill. The bird is primarily grey-black, with narrow off-white fringes to the feathers, giving it a scaly appearance. This is relieved by a patch of cream-coloured feathers on the ear coverts, and the tail has large white panels, especially noticeable when the bird is flying. The bill is grey-black on males and off-white on females; males have a pink eye ring, and females have a grey one; and both sexes have greyish legs and feet, though the females’ are paler. The average size is 55cm.

The Carnaby’s Black-Cockatoo is noisy with a distinctive ‘wy-lah’ call, though there is much variation. Bird call recorded by: Niels Poul Dreyer 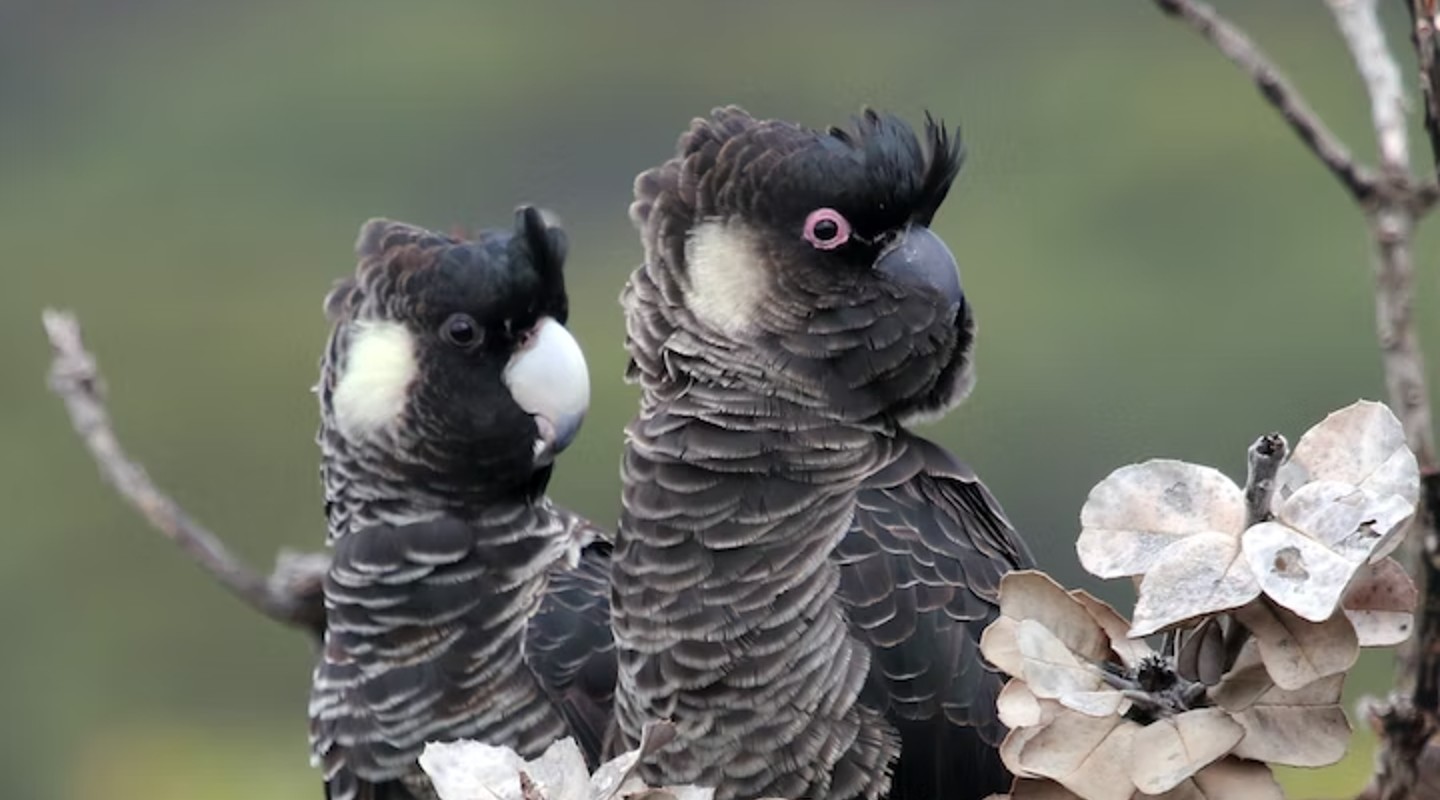 Carnaby’s Black-Cockatoos occur only in south-western Western Australia, between Cape Arid and Kalbarri, in the wheatbelt. They are partly migratory and partly resident. Sometimes known as the ‘rain bird’, Carnaby’s breed in the drier part of their range and move to higher rainfall areas in the summer.

The Carnaby’s Black-Cockatoo inhabits native woodlands dominated by eucalypts such as wandoo and salmon gum, as well as nearby heathlands. They need large hollows in tall eucalypts for breeding. From late winter till summer, they usually occur in these habitats in inland parts of their range. In late summer, they move to coastal and near-coastal areas, where they sometimes occur in built-up areas.

Carnaby’s Black-Cockatoo is often rather conspicuous, sometimes congregating in large flocks. They are even considered pests by some farmers when they descend onto crops of almonds and similar foods. Cockatoos may move along a branch, biting off cones or seeds and green branches for no clear reason.

The Carnaby’s Black-Cockatoo eats mainly seeds of plants from the Proteaceae family, introduced pines and sometimes nectar, flowers and insect larvae. They feed in trees. They cut off seeds and cones with their strong bills and then hold the food with one foot while they strip the seeds. They sometimes forage in pine trees and orchards. Occasionally, they forage on the ground, especially in areas with the agricultural weed Erodium.

Carnaby’s Black-Cockatoos breed in monogamous pairs, and nest in hollows in old eucalypts, which must be at least 100 years old to have hollows large enough. Pairs return to the same nest site each year. They lay one or two white eggs, which are incubated by the female for 28 days. The nestling period is 70 days, and both parents feed the chicks, but only the female broods them. She is fed by the male, though she may leave to get water. Their breeding season is from late July to October.